I haven't been so angry as I am about the Fulham game in a very long time. We've slowly been moving away from the free flowing football that we had when Ronnie, Tevez and Rooney were here. An under Fergie it's been edging this way and to be honest summed up our football last season.

BUT fucking Moyles is winding me right up, I was all for giving him a go, thought he might have us playing more attractive football but it's got worse, he has RVP, Rooney, Mata and Adnan as an attacking force and he's playing tactics from 1987. I seriously couldn't sleep last night because I was so fucking angry and this cunt is the reason.

I know most of you are like me but I had to vent and get it out of my system. Was fucked off big time last night and shouldn't really get like that anymore.

Maybe this could be a sticky just to curse and vent!!!
Life is what happens to you while you're busy making other plans...


Rant's official saviour, International Lovemaker to the Stars and prince of cunts
Top 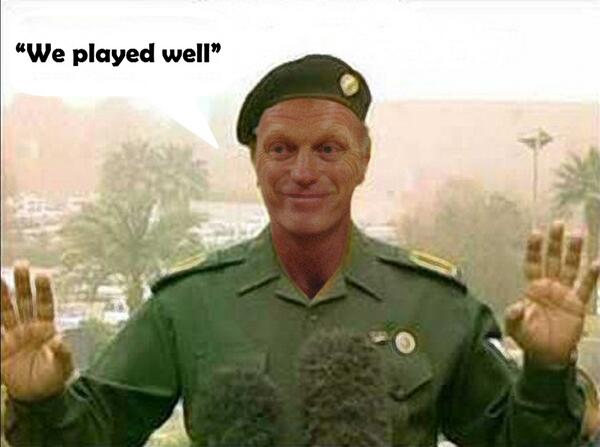 You linked this on twitter!! If I'd known, I would have proof read my post and ranted on!!
Life is what happens to you while you're busy making other plans...


Rant's official saviour, International Lovemaker to the Stars and prince of cunts
Top

Found myself going online praying to read Moyes has resigned... No such luck... Bastard

Do you want Fries with that?
Top

He has a six year contract no chance of him resigning. I'm past angry and right round to hoping it just gets worse and worse, in case you hadn't noticed. I just can't understand posters wanting us to win or even play well under Moyes. If it happens it'll be down to individual effort or skill it won't be a tactical decision emanating from Moyes or his staff. They're like wasps at at window doing the same thing over and over and it won't stop until someone shows them the door.
"Respect! Respect! Respect Maan! Respect! Respect!........."

I woke up this morning and remembered that we hit 82 crosses into the box yesterday, and couldn't help but laugh
Top

Sid wrote:I woke up this morning and remembered that we hit 82 crosses into the box yesterday, and couldn't help but laugh

Do you think Moyes knew their CB was 6ft 7?
Top

What fucks me off that we're 'supposedly' one of the biggest clubs in the world yet we don't act like it.

Unable to compete for the best players in the world - we all know why
Unable to capitalise on our status as champions by going out and getting the best manager available. No we have to take 10 steps backwards and get David Moyes. Bayern Munich win the treble and go out and get Guardiola. No messing about.
Top

"My job goes under the radar at times. I am not a player who’s going to beat three or four people and stick it in the top corner or go round tackling people like Roy Keane."

Your a fucking midfielder you TIT. Why not add, or pass forwards or beat one or two people or attempt to win. Shut up you whining cock!!!!

Here read for yourselves keep a tissue handy……..

36 attempted passes in the last game he played

31 were successful, 7 forwards, the rest sideways

He doesn't want the ball, he doesn't look for it. He might be short on confidence but he never has really been interested in looking for the ball